What's on your mind?

https://screenrant.com/amazing-spiderman-3-andrew-garfield-tom-holland-support/ Let's hope that this happens!

I for one would watch it in a heartbeat.

https://insidethemagic.net/2022/03/amazing-spider-man-chasm-th1/comments/ If we can somehow get Andrew Garfield back as the Amazing Spider-Man and have his story and series get the closure that they need/deserve, that would be just perfect. #MakeTheAmazingSpiderMan3! #MakeTASM3! #SaveAndrewGarfieldAsSpiderMan! #MakeTASM4! #MakeTheAmazingSpiderMan4!

There were canceled films like TASM 4 and beyond. Now the articles of those CONFIRMED films were deleted. 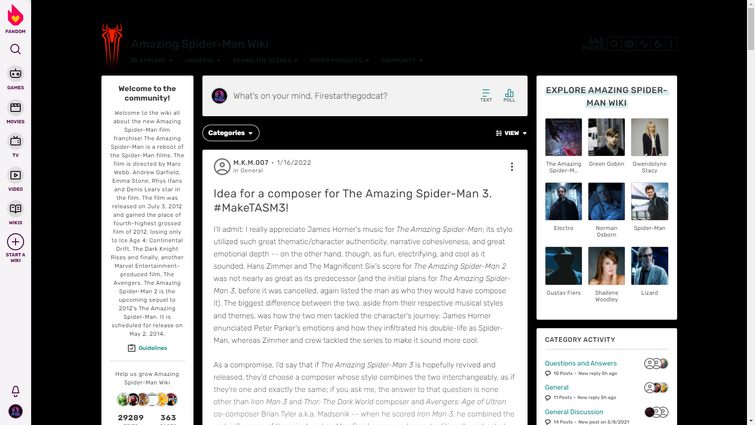 Can one of the admins do something about this? Thanks.

I'll admit: I really appreciate James Horner's music for The Amazing Spider-Man; its style utilized such great thematic/character authenticity, narrative cohesiveness, and great emotional depth -- on the other hand, though, as fun, electrifying, and cool as it sounded, Hans Zimmer and The Magnificent Six's score for The Amazing Spider-Man 2 was not nearly as great as its predecessor (and the initial plans for The Amazing Spider-Man 3, before it was cancelled, again listed the man as who they would have compose it). The biggest difference between the two, aside from their respective musical styles and themes, was how the two men tackled the character's journey: James Horner enunciated Peter Parker's emotions and how they infiltrated his double-life as Spider-Man, whereas Zimmer and crew tackled the series to make it sound more cool.

As a compromise, I'd say that if The Amazing Spider-Man 3 is hopefully revived and released, they'd choose a composer whose style combines the two interchangeably, as if they're one and exactly the same; if you ask me, the answer to that question is none other than Iron Man 3 and Thor: The Dark World composer and Avengers: Age of Ultron co-composer Brian Tyler a.k.a. Madsonik -- when he scored Iron Man 3, he combined the rock influences of the prior two Iron Man films' scores and more traditionally orchestral tones from the likes of Alan Silvestri, David Arnold, and the late Jerry Goldsmith into each other, so he could create a similar combination with The Amazing Spider-Man 3, something that musically enunciates the emotions of our hero all the while sounding cool and how the two infiltrate each other (and as such, the first step would be to create his complete theme, something that precisely combines what James Horner did for him and what Zimmer and crew respectively did for him into each other).

How does this sound to you guys??? I know that Horner's theme was used a couple of times in Spider-Man: No Way Home, but there are also those who appreciate Zimmer and crew's stuff even more, and there are even those who appreciate them both for what they are, that's why I was suggesting a man who'd create such a musical compromise. #MakeTASM3! #MakeTheAmazingSpiderMan3!

Who Sees the Resemblance? | FandomIs it weird that some of the characters from the…marvel.fandom.com

...should his article here be updated to describe the events that he went through in the M.C.U. alongside both Holland and Maguire? The thought came to my mind as I read his M.C.U. fandom article, but I'd like to hear your opinions on that, too.

Ok I know that my name is Lloyd4Ever but believe me, Spider-Man tops hime by a million. Anyways...........why did they cancel The Amazing Spiderman 3? It looked as epic as pineapples :/. Well I hope it does come out sometime. Luv ya Spidey :3.

Does anyone know the brand that he used to fuse and create the eye sockets for his first suit?

I've seen it is available for Spider-Man PS4.

The Amazing Spider-Man 2
me
not me

The Amazing Spider-Man trilogy is great and all but doesn't top up the Raimi trilogy tho.

It's about "Venom" the movie. Are we sure that this is set in "The Amazing Spider-man" universe? Marvel movies wiki said it's been debunked. So, is it true this movie isn't set in this universe or might this be that the amazing spider-man franchise might still be good. I hope so, because I like if it's set in that universe. I think it might because the tech does look like the tech from the amazing spider-man movies. If anyone knows about this movie and shed light on it, that would be kind of you.

This is the place to talk about your favorite topic, to share news, theories, ideas, and to connect with others. The content from your Forum has been converted to Discussions posts, so nothing has been lost.

To learn more about what you can do here, check out community.wikia.com/wiki/Help:Discussions

If you're an admin on this community, read more about how you can customize your Discussions and set up guidelines for contributors: community.wikia.com/wiki/Help:Admin_and_Moderator_Tools_in_Discussions

The Amazing Spider-Man - Volume 4 - Directed by A. Rabbi.