To date, there have been five downloadable content (or DLC) released for the video game The Amazing Spider-Man (excluding the DLC Bundle Pack, which contains all five othertetas DLCs)

Also available is the DLC Bundle Pack, which allows players to purchase every single DLC pack at once (see below).

Coinciding with the release of the PC version, developer Beenox released a DLC bundle pack which contained all available Downloadable Content to date. It was made available for digital download from both the PlayStation Store and Steam for $9.99. The Bundle Pack is currently unavailable in Europe. 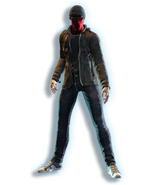