The Goblin Glider is a a weaponize vehicle made by Oscorp which is used for transport. Harry Osborn uses it to fight Spider-Man.

The glider is a transportation device created by Oscorp. It was kept with a specialized exo-skeleton in the Special Projects chamber Including the goblin suit. The exo-skeleton is also revealed in a deleted scene to heal the person using electrically conductive nano-fibers, it is also an Oscorp prototype of a new military body armor. 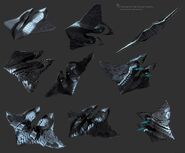