“You don't give people hope, you take it away. Now, I'm going to take away yours.”
―Green Goblin[src]

Harry Osborn is the secondary antagonist (alongside Electro) of the 2014 superhero film The Amazing Spider-Man 2.

He was a childhood friend of Peter Parker and the current CEO of Oscorp Industries after inheriting the company from his father, Norman Osborn, who had passed away earlier. Due to a recessive gene called 'Retroviral Hypodysplasia ' passed on from his father, Harry quickly began to succumb to a disease that began to eat him away from the inside, starting with twitching in his fingers. After a failed attempt at obtaining some of Spider-Man's blood to try and cure himself, Harry injected a serum into his body made by Oscorp during their spider testing stages. Instead of it curing him, the serum simply quickened the process of his inherited disease and transformed his physical body as well as his mind, rendering him insane. As he struggled to move, he found a special, metallic suit, attached to a glider.

Harry donned the suit, grabbed some explosives and flew the glider out of the building as the Green Goblin. He confronted Spider-Man, although was defeated by him, but succesed to indirectly kill Gwen Stacy. He and Gustav Fiers formed a "team", but they decided to start with Aleksei Sytsevich, who Aleksei dubbed himself as Rhino. In Spider-Man's return, Rhino was defeated, making Harry's plan failed with Aleksei.

“Peter Parker, it's like seeing a ghost.”
―Harry Osborn[src]

In 2014, the 20-year-old Harry returned home just before his dad passed away. Harry was now Oscorp's CEO and was soon reunited with his childhood friend. The two caught up, and Peter informed Harry about Gwen Stacy. Harry also became convinced that the blood of Spider-Man (whom he had figured out had gotten his powers from one of the now-destroyed spiders) would be able to cure him. Knowing that Peter had taken photos of the hero, Harry asked him to get in touch with Spider-Man. Later, Spider-Man appeared in Harry's home but refused to give him his blood regardless of what Harry offered him, as he believed his blood would have a negative effect on Harry if it wasn't compatible.

Harry became increasingly desperate until his assistant informed him that Oscorp had drained venom from the spiders before destroying them. He tried to find out where it was stored, but came across information about Electro and was quickly locked out of the system. Donald Menken framed Harry to save himself and had him fired. Enraged, Harry sought out Electro, who was at the time being held at Ravencroft and freed him. Together with Electro, Harry headed back to Oscorp and took Menken hostage while sending Electro off to take out the city's power. Menken took Harry down into a secret area and was forced to inject Harry with the spider venom. The venom had a violent effect on Harry, seemingly accelerating the disease rather than curing it. In pain, he crawled over to an Oscorp prototype exoskeleton suit and glider. Upon putting it on, the suit healed the damages done to his system.

Harry as the Goblin flew to the power plant on the glider, arriving shortly after Electro's defeat, the spider venom now seemed to be affecting his mind as well. Noticing Gwen with Spider-Man, he quickly realized that Spider-Man was Peter Parker. In a rage, Harry decided to destroy Peter's "hope": Gwen. Harry grabbed Gwen and flew away, with Peter giving chase. Shortly after, he threw her down into a clock tower, where Peter was able to catch her. Harry began fighting Spider-Man inside of the nearby clock tower, however, Gwen was ultimately killed in the ensuing battle. Harry was knocked out and taken to Ravencroft, though Gwen's death caused Peter to give up the mantle of Spider-Man.

Months later, Harry was visited by Gustav Fiers, who informed Harry that he had found several suitable candidates for a project. Harry asked him to keep it small and sent him down to the secret area, to collect weapons and equipment for the chosen candidates. The first was Aleksei Sytsevich, who was given a rhino-like mech suit. Peter Parker re-emerged as Spider-Man shortly after to combat "The Rhino".

After "The Carnage Killer"'s massacre on the criminals, which led the first attack and was set in Oscorp between Russians and Shocker's gang, Harry was approached by Wilson Fisk the Kingpin for their cooperation to put an end of the crime war and would not allow a vigilante like Spider-Man to do so. On the other side of the conference, Harry was forced to make a deal with Kingpin to boost the public image of Oscorp. During a party at night with Fisk, he was targeted by a Russian's assassin who disguised as a bartender to poison Harry to death, but luckily his best friend Peter secretly noticed about the bartender as he bumps into to him by "accident" to save Harry from being killed. They talk about Fisk and Harry gave him as much information as he could. Fisk quickly professed a desire to take Oscorp for himself and revealed he knew about Harry's disease. When Peter talked to him regarding Fisk establishing himself as the number one crime boss in New York, Harry reveals his disease and feelings of depression regarding Fisk and his disease and implores Peter to reach out to Spider-Man to save him. As Spider-Man is actually Peter himself, Spider-Man met him as soon as possible but refused to give him his blood without researching it's safety as it could turn him into a monster or kill him. Upset, Harry dejectedly dismissed Spider-Man and in his desperation began human experiments and started to become obsessed with saving himself while also becoming embittered at Fisk, Menken and everyone who is trying to take what was his. Becoming Green Goblin in the end due to his refusal to listen by injecting himself with Richard Parker's spider venom formula, the pain and changes won't go away and in his anger Harry ordered Oscorp to be attacked by inmates he freed from Ravencroft to lure Spider-Man so he could kill and study him. Spider-Man is able to defeat Harry and Harry pleads for Peter, who he somehow knows is Spider-Man, to give him a merciful death. However, Spider-Man refused and telling Harry to think hard because there many people who are having a natural illness or same disease all over the world, even they don't have the money or resource has Harry's, and tells Harry if he didn't fight for himself, Harry will owe to them to find an answer for his mistake and do whatever he can make up for them. As Spider-Man leaves by telling a great man Spider-Man knew had taught him, and Harry tries to call back Spider-Man by his real name, Harry faints. While it seemed he perished after his battle with Spiderman, it was confirmed by the Kingpin that was still alive and taken to either jail or Ravencroft, regardless the Kingpin takes over the Oscorp glider air force.

In the game version, Harry seems to be less-short temper, he does not meet Max Dillon yet, he's being threatened of dying by Menken replaced with Fisk at the beginning of some chapter before Task Force established, and seems not to be patient in waiting for a bit research on Spider-Man's perfect cross-species blood to cure him before Kingpin takes over Oscorp soon when he died. After transformation into Goblin, the scene does not involve Gwen Stacy as she still alive somewhere.

Harry Transforming into the Goblin

Harry Osborn as the Green Goblin. 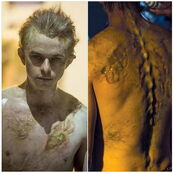 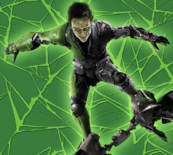 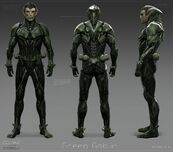