“What makes life valuable is that it doesn't last forever. What makes it precious is that it ends.”
―Gwen Stacy[src]

Gwendolyne "Gwen" Stacy was the classmate and girlfriend of Peter Parker and the daughter of the chief police officer, George Stacy. Gwen was also a senior research officer at Oscorp Industries.

“Oh, I know what your name is. I just want to make sure if you know your name.”
―Gwen Stacy[src]

Gwen Stacy was born the oldest child to New York police captain George Stacy and Helen Stacy. Intelligent and beautiful, Gwen was one of Midtown High School's star students, alongside fellow star student Peter Parker. She was also friends with the lead quarterback/school bully Flash Thompson, one of his few friends, and helped him with his homework. She later applied for internship at Oscorp Industries, gaining a position as lab assistant to Dr. Curt Connors, the head scientist of the Cross-Species Genetics research division.

One day while studying during lunch, Gwen angrily admonished Flash for bullying Gordon and Peter, talking him down with threatening to quit helping him study. She later comforted Peter in class, commending him for standing up for Gordon and advising him to go to the nurse, seeming to take an instant liking to him.

Peter and Gwen would once again encounter each other when Peter snuck into Oscorp Tower where she worked, under the pretense of an intern for the Oscorp Bio-Lab tour. Instantly recognizing him, following Dr. Connor's introductions, she confronted Peter over using someone else's ID badge to sneak in, although he denied stalking her, actually interested in learning more about the Cross-Species research. Despite telling him to stay with the group, Peter snuck into a hidden lab that housed several modified spider specimens (replications of his father's own work), as well as discovering a prototype bio-cable woven from strengthened spider-webs from them. Accidentally letting loose several of the spiders, Peter managed to escape from the lab, only to run into an angry Gwen, who demanded he give the badge back and leave for breaking the rules. As Peter left, he was bitten by one of the spiders, unknown to them both.

In the following week, the spider-bite's modified venom ended up mutating Peter's genome, inexplicably granting him spider-esque attributes, actually making him a successful cross-species subject. Upon realizing this, Peter began to test his new abilities. One of these times included getting back at Flash in the gym by humiliating him in a basketball game, using his powers to perform a perfect slam dunk (which accidentally broke the backboard). After talking with his uncle Ben before leaving school, Ben noticed Gwen watching and pointed out Peter had the graduation photo she was in zoomed in as his computer desktop, playfully embarrassing him, while Peter tried awkwardly clearing this up.

Peter would later visit Dr. Connors to consult him on his relationship with his dead parents. After being invited to the lab to help solve the decay-rate algorithm (by using the sequence of his own condition), Peter had taken far too long after helping complete it with Connors. This caused him to forget to pick up his aunt May from work as he'd promised. Getting home late and being reprimanded by this by Ben, Peter was angered by the fact Ben tried used his late father as an example to follow, and ran off. Ben would later end up shot and killed by a thief from a convienence store, which devastated Peter, who blamed himself as he'd let the thief rob the store's clerk for being rude to him.

The following day, a forlorn Gwen watched a grieving Peter approached by Flash, and mistaking it for another round of bullying, slammed him against the lockers, only for Flash to express his condolences for Peter's loss, to which Peter let him go. As he walked away, Gwen approached him and gave him a heartfelt hug to comfort him, also feeling sad for his loss.

Seeking to bring Ben's killer to justice, Peter resolved to use his new powers to track down and apprehend the killer. He spent several weeks stopping many crimes, checking the wrists of each thug he caught (as the killer was reported to have a star tattooed on his wrist). To better protect himself and those he knew, Gwen included, from vengeful crooks, Peter crafted a red-and-blue spandex uniform and replicated Oscorp's bio-cable into creating small "Web-Shooters" to use to swing across the city in pursuit of crime, becoming a costumed vigilante.

Meanwhile, thanks to Peter's help, Connors was able make progress in the Cross-Species ongoing field to procure an experimental serum using lizard DNA in hopes of a new form of gene therapy to help creatures regenerate lost limbs. But due to his superior Dr. Ratha pressuring him into beginning human trials under threat of firing him, Dr. Connors tested his serum on himself. It proved a success and his arm regrew overnight, but the genetic modification ended up far more volatile and unpredictable than Peter's, and ended up mutating Connors into a humanoid lizard-beast.

When the Lizard planned to use reptilian DNA to turn the entirety of New York into humanoid lizards, Gwen helped Peter stop his plan by getting an antidote to replace the reptilian serum. Peter called Gwen while she was at Oscorp saying that she was in danger. She evacuated everyone out of Oscorp and waited for the antidote to finish.

When the Lizard came, Gwen hid where she was later found but unharmed who took what Gwen had with her. After the Lizard leaves and the antidote finishes, she runs out to her father, George Stacy and told him to give it to Spider-Man as she then went into the police car.

After her father was impaled by the Lizard, Captain Stacy's last words were a promise for Peter to keep Gwen out of the action he has to face. Peter ended up not showing up to her father's funeral saying that he couldn't see her anymore, because she could get hurt. Later at school, he said that he wouldn't keep to that promise so he and Gwen were able to see each other.

“You're Spider-Man and I love that. But I love Peter Parker more.”
―Gwen Stacy[src]

2 years later, Gwen and Peter are graduating high school. However, Peter is pursuing a robbery of plutonium by Russian convict Aleksei Sytsevich as Spider-Man while on the way, to which she calls Peter on the phone to remind him he's running late. Gwen then makes a speech to her fellow class-mates and their families. Afterwards, Peter meets Gwen at their high school graduation ceremony where the two share a kiss. Gwen and Peter talk where she invites him to dinner before she is called by her mother for a family photo. Later in the evening, Peter tells Gwen about the visions he's been having and insists that he needs to keep his promise which as a result, Gwen breaks up with Peter.

Gwen is seen then working at Oscorp and meets Max Dillon in an elevator which she finds out is his birthday and is obsessed with Spider-Man. Peter later meets Gwen in attempt to maintain a friendship which they establish some 'ground rules'. Gwen tells Peter that an opportunity to Oxford means she has to move to England. Before the two can discuss it, Max accidentally shuts off the power to Times Square whilst looking for electricity to power himself. As Electro reveals himself as Max, Gwen recognizes him and later tries to find his file at Oscorp, but the file has been erased. Gwen is then chased by security for trying to find his file and runs into Peter who says he was with . As Gwen goes to the elevator, Peter distracts the security guards and Gwen then meets Harry who tells her that Peter is always complicated, but that is why he needs her.

Peter then receives a voicemail message from Gwen, telling him that she got into Oxford University and was heading to the airport to fly there earlier than expected because of an earlier class. Peter manages to catch her and professes his love for her, and the two agree to go to England together. They are interrupted by a blackout caused by Electro. Peter takes Gwen down where the police are and Gwen helps him with his web-shooters to go against Electro. Peter heads off to fight with Electro having the upper-hand. As Electro has Spider-Man in the air and is electrocuting him, Gwen comes in a police car and hits Electro, against Peter's demands. The two plan to defeat Electro by overloading his electricity supply. Just after they do so, Harry Osborn arrives, now as the Green Goblin, and figures out Spider-Man’s identity and that he wants revenge for being refused the life-saving blood transfusion. Goblin takes Gwen and drops her where Spider-Man catches her. The two fight at the top of a clock tower and Spider-Man manages to subdue the Goblin. However, during the fight, Gwen falls and is supported by a web connected to one of the gears. The gears turn, cutting the web, and Gwen again falls. Goblin is then defeated and Peter tries to save Gwen by diving after her and using his web. Before Gwen hits the ground Peter's web reaches her and stops the fall, the sudden stop causing her neck to snap, which causes her to die instantly.

5 months pass and Spider-Man is nowhere to be seen in New York, as Peter spends every day at Gwen's grave. Peter is inspired by a recording of Gwen's graduation speech and makes his return as Spider-Man to fight Rhino to keep her memory and beliefs, including her love for him, alive.

Gwen is mentioned by Peter several times. It is revealed that following her death he never found someone else, and later became more violent and bitter during his crime fighting career. A decade on following her death, he is teleported to another reality where he meets two other versions of himself, and speaks about Gwen to them. Peter rescues the girlfriend of that world's Peter Parker Michelle Jones (MJ) when he falls from a large height.

After the Lizard's defeat and her father's death, Gwen refused to forgive Connors. Instead, she buried herself in work, moving Oscorp's robotics division under the tutelage of the chivalrous and intelligent Alistaire Smythe. Still, she suspected something was up at Oscorp and snuck Peter in one evening to help her check things out. Little did she realize that Peter's arrival would spark a riot among Oscorp's remaining cross-species specimens and her infection with the cross-species virus.

Though sequestered to quarantine within Oscorp Tower, Gwen fought off her illness as best she could, as she did what she could from her position to help Spider-Man save the day. Whether updating Spidey on the level of contamination, hacking into computers, or reprogramming Smythe's robots to do her bidding, Gwen was on it. As the dust settled and the city was cured, Gwen remembered how much she loved the guy behind Spider-Man's mask. She now visits Peter almost every day at his aunt's friend's apartment.

This section is a stub. You can help expand this section by adding some information. 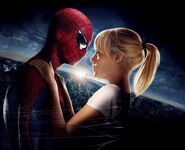 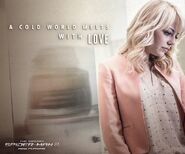 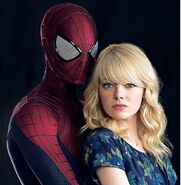