“I spent my life as scientist trying to create a world without weakness, without outcasts. I sought to create a stronger human being but there's no such thing. Human beings are weak, pathetic, feeble-minded creatures. Why be human at all when we can be so much more? Faster, stronger, smarter. This is my gift to you.”
―The Lizard[src]

Curtis "Curt" Connors is a former scientist at Oscorp Industries. He was Richard Parker's partner and colleague, and was working on the Lizard Serum with him. After Parker's death, Connors befriends his son, Peter.

The Lizard is a perfect example of science gone awry. One could blame Connors for creating the Lizard, but no one should blame him for the actions the Lizard does. When his reptilain mind takes over, Connors loses complete control and there only remains the savage, powerful, cross-species monstrosity known as the Lizard.

Some many years ago, Connors lost his right arm up to its elbow. As would be expected, this greatly affected him emotionally, and so Connors endeavored to find a "cure".

Dr. Connors soon came to be a scientist working at Oscorp Industries, and he met Richard Parker, a fellow employee, who wished to help Connors in his search for a cure. Though, the day that Richard and his wife, Mary, mysteriously went missing, Dr. Connors decided to totally shut down his work indefinitely. Years later, while working with some interns at Oscorp Tower, Curt Connors encountered Peter Parker, whom impressed him due to his knowledge beyond most teenagers. During this encounter, Connors did not find his name, but just thought him to be another intern.

A few days later, Peter came to Dr. Connors' house. Connors recognized Peter from the other day and, assuming he wanted an autograph, was quick to ask him to leave. However, Peter introduced himself as Richard Parker's son, and the scientist invited him in. They discussed the work that Peter's father and Dr. Connors were in, and why Connors had not approached the Parkers before. Peter proceeds to give the scientist his father's "decay rate algorithm", something he had been working on before his disappearance.

Later, Dr. Ratha, a colleague of Connors', approaches him, requesting him that he quickly find a cure for their dying boss, Norman Osborn. Dr. Connors agreeing to do what he can, Ratha leaves.

The following day, Peter met again with Dr. Connors in the scientist's laboratory. Peter proceeded to enter the decay rate algorithm in to a computer, with a hypothetical mouse being the target, but it fails to work at first. Peter continues to do it, finally getting a successful result that enables the mouse, named Fred, to grow an extra limb. Dr. Ratha approaches Connors, having seen the effects of Peter's decay rate algorithm, demanding that he starts human trials straight away, if they're to treat their dying employer. At first, Dr. Connors refuses to test people with the formula, causing him to be fired. Dr. Ratha decides to use the serum at a Veterans Administration hospital, under the guise of a flu shot. Connors, desperate to impress, injects the formula in to himself instead. Nothing happens immediately, and Curt falls asleep. When he awakes, his limb has fully regrown.

The scientist hears about Ratha's plan to inject the formula as a flu shot, and raced to intercept him. Along the way, Dr. Connors' arm, the one that regenerated, started to turn green and scaly. Just as he reaches the Williamsburg Bridge, he fully transforms in to a giant, mutated man-lizard hybrid. Unable to control his alter ego, Connors flips cars over the side of the bridge, the occupants only to be saved by Spider-Man.

The Lizard goes to the sewers, near to where Dr. Connors has constructed an underground lab. Spider-Man, having the suspicion that the Lizard is Dr. Connors himself, follows him. He proceeds to take a picture of the Lizard, via means of carefully-placed webs, but the camera is destroyed by the Lizard, not before he reads the camera's owner's name. Dr. Connors, as the Lizard, follows Peter Parker to his school. After ripping through the school to find him, the two finally engage in a battle. While Spider-Man's webs subdue the Lizard, they ultimately fail to do any harm.

After a quick battle, the Lizard runs through the streets of Manhattan. Aiming to reach Oscorp Tower, he finally gets there, having turned some police officers that subdued him in to lizard-men. The scientist-turned-lizard tries to get a machine that will release a toxic cloud, causing all humans to turn to a lizard-hybrid, like him. Gwen Stacy, his protégée, tries to stop him from taking it, but he wins over, not wanting to harm her.

Dr. Connors climbs to the top of Oscorp Tower, planning to release a gaseous cloud turning the human race in to lizard cross-species. Before he can do this, Spider-Man arrives. The two proceed to fight. George Stacy, captain of the police force, assists Spider-Man, knowing his true identity. Captain Stacy uses a shotgun to injure the Lizard, but this does next to nothing to the huge beast. Dr. Connors, not having control of his mind, stabs the cop with his claws.

Meanwhile, Spider-Man finally reaches the peak of the tower, and is able to replace the machine with an antidote to Connors' serum. Peter releases the cloud, causing the Lizard to turn back to an injured Dr. Connors, as well as changing the former police that became cross-species.

Following the ordeal, Dr. Connors is locked up in Beloit Psychiatric Hospital. He is visited by a mysterious man, seemingly familiar to the scientist. The man asks if Connors told Peter the truth about his father, but Curt demands Peter be left alone before the man mysteriously disappears.

The trial of Dr. Curt Connors came to an end as the former geneticist for Oscorp Industries was found guilty on all twenty counts for which he was indicted, including the murder of NYPD Captain George Stacy. Connors and his attorney, Anne Weying, were unable to convince the jury that he was not responsible for his deadly actions while transformed. His defense that he only injected himself with the serum that changed him into the Lizard to prevent Oscorp Industries from experimenting on innocent civilians did not sway the jury.

Next stop: Rikers. But even that is controversial. Ravencroft Institute for the Criminally Insane has said their facility is better served for housing and studying a prisoner such as Connors, but the judge has yet to rule on where Curt Connors will spend what is likely to be the rest of his life.

After months at Beloit, Spider-Man appeared at the hospital with an odd proposition: Spidey would help Connors escape if Connors helped develop a serum to control the cross-species outbreak and save Gwen Stacy from infection. Connors agreed, sensing an opportunity for redemption. But he made Spider-Man promise not to let the dreaded Lizard resurface.

Spider-Man and Connors worked together to develop the serum. After their first try failed miserably, Spidey questioned Connors' true intentions. Suspicion turned into a tense confrontation, but Connors discovered a startling revelation: Spider-Man was the key to curing the outbreak. Connors used Spider-Man's DNA to create a new, improved serum. For the first time in a while, things were looking up for Curt Connors, but not for long when the infected, yet madden Smythe captures him to lure Spider-Man. While trying to escape, Spider-Man sacrificed his life to save Connors, so he could continue to create more cure.

As all people of New York are infected, and Smythe unleashing his robots to kill all of the people in the city, a desperation forced Connors to make a terrible decision: he had no other choice but to transform into the Lizard one final time and use its strength to smash Smythe's robot army. As the Lizard, Connors fought as Spider-Man's teammate. But after Smythe's defeat, the Lizard's reptilian brain clawed back in control. However, as a battle for the ages ensued, Spider-Man found the chance to inject the serum into Connors and revert him back to human form.

As promised, Spider-Man returned Connors to Beloit, with a newfound respect for this scientist who helped save Gwen and the people of New York. Today, Connors still wrestles with his inner demons, but his path to redemption has begun.

“Blood panels reveal lymphocytes and monocytes reading consistent with the subject's past. Clotting rate vastly improved. Marked enhancement in muscle response, strength and elasticity. Eyesight similarly improved. Subject no longer requires corrective lenses. This is no longer about curing ills. This is about finding perfection. In attempt to redress regenerative relapse, dosage has been increased to 200 milligrams.”
―Lizard[src]

“You stopped me once. You won't stop me again. I'm getting stronger every day!”
―The Lizard[src]

“I'm not a cripple, I'm a scientist, and I'm the world's foremost authority on herpetology. That's reptiles, for those of you who don't know. But like the Parkinson's patient who watches on in horror as her body slowly betrays her, or the man with macular degeneration whose eyes grow dimmer each day, I long to fix myself. I want to create a world without weakness.”
―Lizard[src]

The Lizard and Dr. Ratha.

Wall poster of the Lizard.

Leaked promotional art of the Lizard. 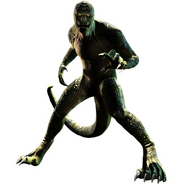 The Lizard in the video game, The Amazing Spider-Man.

Early artwork on the Lizard. 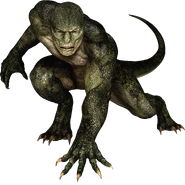 Concept art of Spider-Man vs Lizard in the sewers

Close up of the Lizard's face while wearing his lab coat

Spider-Man vs Lizard on the Oscorp Tower 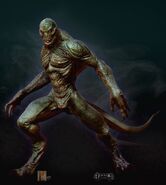 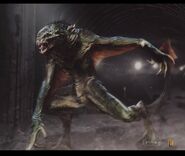