The Lizard Rampage Pack is downloadable content (DLC), or an expansion pack, for the video game The Amazing Spider-Man. It allows players to take control of Curt Connors as the Lizard and rampage around the streets of Manhattan, New York.

The DLC was released on September 25th, 2012 in North America as a digital download on Steam and the PlayStation Store for $3.99 and on Xbox LIVE for 320 Microsoft points. It is scheduled to be released in Europe in later year.

"Become the Lizard: The notorious Lizard is on the loose again in Manhattan! Take control of Dr. Connors' terrifying alter-ego in a race against time. Rampage through the streets using your devastating stomp attack and tail swipe to defeat Oscorp Guards and earn mega points. Use your boost jump to bound great distances over the city. Destroy blast towers to buy yourself more time and delay Oscorp from releasing their cross-species containment blast across the city!" - DLC's description on Steam

The Lizard in action

The Lizard hangs from a building. 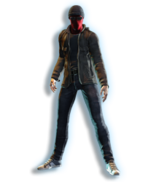