Mary Jane Watson is a cut character from The Amazing Spider-Man 2.

Mary Jane Watson was a student of Midtown Science High School and a resident of Forest Hills, Queens who worked as a waitress in Brooklyn. She was shown to be a friend of Gwen Stacy, who talked with her at her house after their graduation.

Shailene on set for The Amazing Spider-Man 2 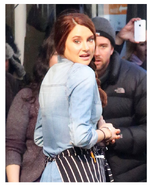 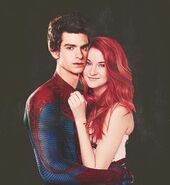 Promo photo of Andrew and Shailene as Peter and Mary Jane, indicating their imminent relationship in the future films