CEO and founder of Oscorp Industries

“I don't expect forgiveness from you anymore. I don't believe in miracles. How could you possibly understand that your childhood had to be sacrificed for something greater? And not just for me. For you! Has your hand started to twitch yet? Can you feel it at night? Crawling under your skin? Waiting to show you who you really are? Retroviral Hypodysplasia. I never told you that it's genetic. Our disease. The Osborn Curse. ”
―Norman Osborn[src]

Norman Osborn was the CEO and founder of Oscorp Industries, and the father of Harry Osborn. Despite his industrial succeess, Osborn suffered all his life due to a degenerative disease which eventually kills him. To prevent that, Norman had Richard Parker and Curt Connors work on a possible cure, but Parker was killed (he actually survived; people taught Richard died) after he realized what were Osborn's true intentions for his research.

“I started Oscorp because I looked at the world around me and I thought, "We can do better. And we should do better." Einstein said the world cannot be changed without changing our thinking, but change isn't just a slogan. It begins with hard work. Change begins with persistence and commitment.”
―Norman Osborn[src]

Little is known of Norman Osborn, other than that he had a debilitating disease called 'Retroviral Hypodysplasia' which killed him. Dr. Curt Connors' and Dr. Rajit Ratha's experiments with lizard DNA were an attempt to cure him, until Connors used the serum on himself, transforming into the monstrous Lizard. After the Lizard was destroyed (for the first time), Connors and Ratha quit their works, and Connors was thrown into a mental institute. Currently, there are no known cures for the Osborn illness, and it is unknown if anyone is even attempting to find a cure.

Norman's son, Harry, returns after years away in boarding school and visits him in the hospital, whereby this point Norman is in very poor health. Norman explains to Harry that his illness is genetic and that he is at the right age where it begins to show. Before he dies, Norman gives Harry a device saying it is his life's work. The next day, it is reported that Norman had passed away.

There was a post-credits scene in The Amazing Spider-Man 2 but it was deleted from the final cut. The scene shows Gustav Fiers walking through the Special Projects and going to Door 3. There, you can see Norman Osborn's frozen head. Gustav says "Wake up my friend" Norman opens his eyes. Also, when Norman passes away, you see the nurses rushing in to cover up his body. One of the nurses is pushing a rack with a jar on it. That could be the jar where Norman's Osborn's frozen head was placed.

Darkened photo of Norman Osborn as seen in The Amazing Spider-Man. 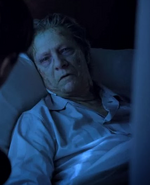 Norman on his deathbed talking to Harry.

Norman's frozen head as seen from a deleted scene. 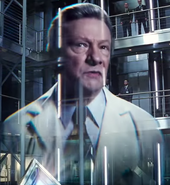 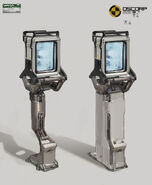