“Altering the future, from the cell to the superstructure.”
― Oscorp Industries motto[src]

Oscorp Industries is the corporation that was created by the famous and wealthy Norman Osborn. The company typically deals with experimental science, military research and cross-species genetics.

Oscorp was founded by Norman Osborn, a very well-known boss throughout Oscorp and even New York. The company's official website holds information regarding their previous attempt to cure the cross-species breakout in the state, which Spider-Man truly stopped.

Oscorp has made their new style to be about helping the world in anyway its employees can. They now believe, after the Lizard incident, that everything works in order as it turns out and that their only goal is to aid the world's citizens. Their newest official promo can be heard upon starting the video game The Amazing Spider-Man.

When Oscorp scientist, Dr. Curt Connors used lizard DNA to try and regrow his missing arm, the serum took over, turning him into a giant lizard whenever he injected himself with the serum. He tried to use a piece of equipment called the Ganali Device to spread this serum all over New York, turning everyone it touched into lizards just like himself. Luckily, he was stopped by Spider-Man before he could spread the serum across the city. Much of Oscorp Tower was destroyed during his rampage.

Oscorp's electrical engineer, Max Dillon was placing a large wire into a vent when it suddenly malfunctioned and electrocuted him. He fell through several platforms into a tank full of genetically altered electric eels. They stung him multiple times until the tank shattered. Max emerged with blue, glowing skin. He had been turned into a living electrical capacitor. Donning himself Electro, he stumbled out of Oscorp into the streets.

Oscorp Tower is the colossal skyscraper that stands as headquarters for the industry. It is unique in design and resembles Oscorp's latest technology. Inside holds many fancy rooms and facilities; its work areas, where loyal employees and even interns can concentrate on their research, its robotics lab department, cross-species facilities, homerooms, the BioLab and security areas. The robotics lab department was previously owned by Doctor Alistaire Smythe until his death. Now, the lab is off limits until further notice. The cross-species facilities are located in few places within Oscorp, and are all in ruins as of now since the horrific outbreak; tubes shattered, doors ripped open, walls torn down, etc. Because of this (and the fact that there still may be some type of virus lurking in these rooms), all areas regarding cross-species genetics work is off limits. Oscorp's homerooms can be found in most places throughout the tower, and they are used for relaxation, breaks and lessons. It is unsurprising to see many employees walking within these rooms. During the breakout, many of these rooms would be used as quarantine to shield off any unsuspecting cross-species. Next, the BioLab was made for research on multiple things regarding Oscorp scientists' work, but during the infection, the Lab was used as a quarantine zone to help cure the virus and save the city. And lastly, if any Oscorp Guards were in the tower, they would be in the security areas, guarding the company's most cherished information found through terminal consoles. It would be very hard to make the slightest movement past these Guards to acquire what they're guarding; that is, of course, except for Peter Parker.

Atop the tower lies the company's tallest satellite antenna and is used for contacting many of Oscorp's other facility buildings. However, the antenna was collapsed since the fight between Spider-Man and the monstrous Lizard. And, since the breakout, much of the tower is in ruin. However, Oscorp architects are hard on working to rebuilding this memorable tower.

This building is the factory in which some of Oscorp's creations are made, but it holds much more than just that. All of Oscorp's thrown-away research has been sent here to be completely obliterated, such as Connors' research data tablet in which Spider-Man had to find in order to help with the ending of the cross-species breakout. This is also where Spider-Man met famous Channel 3 News reporter Whitney Chang.

Within the walls of Oscorp's secret research labs lies something that is heavily guarded: information. This information is very important regarding Oscorp's work, and is also very beneficial to Spider-Man. Spidey snuck in to each one of these labs to uncover the secret information which would soon be very useful to him. He only found these buildings from Whitney Chang's help. Each building contains something different regarding secret work from Oscorp, and Spider-Man has used Chang's camera to get proof of it and reveal it to the world. 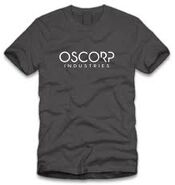 A real-life t-shirt with the Oscorp Industries logo on it.