The Ravencroft Institute for the Criminally Insane, often referred to as Ravencroft Institute, Ravencroft Asylum or simply Ravencroft, is a location featured in the film The Amazing Spider-Man 2. The location is a huge asylum built to imprison insane villains. The Asylum's head is Dr. Kafka who personally treated some of the patients housed inside, like Maxwell Dillon.

Currently, not much is known about the institute other than the fact that it houses criminals and has its own soldier format.

The plaque dedicated to Thomas Warren 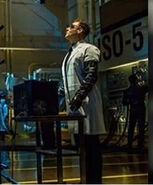