Retroviral Hypodysplasia is a rare, genetic, incurable disease which the character Harry Osborn is diagnosed with and was passed onto him by his father, Norman Osborn, who died from it.

This disease/genetic disorder first starts showing in people at the age of 20. The disease spans over a time of up to 40 years causing internal pain and changes the appearance of its victims giving them features such as: scaly skin, rashes that cause skin to shed and patches to appear on the skin in certain places with a green and scaly texture to them. This disease speeds up the growth of nails and teeth. When Harry's disease accelerated through the use of Spider venom, his nails and teeth grew longer with a matter of seconds, nails growing into narrow dirty claws and the canines lengthening to resemble fangs. Prickly hair standing on end due to the rush of adrenaline that is released due to the disease (the hair on the head will change shape with the longest strands of hair spiking up). The disease seems to turn the victims eye's green and will also dilate their pupils, due to the effects of homicidal rage which is released throughout the body as a late stage of the disease.

Norman Osborn's deteriorated appearance as a result of disease

Harry Osborn's deteriorated appearance as a result of disease

Another shot of Harry's deteriorated appearance 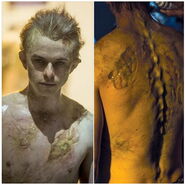