The Amazing Spider-Man
Scorpion is a cross-species creation of Oscorp Industries.

Of all the cross-species facing off against Spider-Man, none features a more cold, menacing appearance than Scorpia - and for good reason. Normally reserving his genius toward his specialty in nuclear science, Oscorp physicist Dr. Otto Octavius dug into Curt Connors' research as quickly as it became available to him. Not satisfied with simply infusing human DNA into a highly venomous black fat-tailed scorpion, Octavius also threw in a touch of mysterious, organic "black goo" of unknown origin, which Oscorp had recently retrieved from one of the company's fallen satellites in secret. The result was Scorpia, an experiment Octavius also would affectionately refer to as "MAC" (amusingly standing for "my astonishing creation").

Incredibly agile and twice as strong as Spider-Man himself, this personification of everything Alistaire Smythe aims to annihilate also boasts the ability to grab prey with one hand, then cut it in have with the pincer on the other. Scorpion's stinger houses the most toxic venom which the world has ever seen you can see glowing green through the slits on her armoured like body and she has been known to project it from long distances as well. As if that weren't lethal enough, she's just as likely to whip victims with her tail, which itself slings freely at ninety miles per hour.

Octavius was particularly pleased with one unexpected side effect of the "extra element" he added: no other cross-species derived outside of a human subject possesses anywhere near the intellect of Scorpia. A quick glance at her stoic face reveals her instinctively cunning nature, which in turn has prompted Scorpia to concentrate closely on - even learn, to a certain degree - human speech patterns. Though she currently "speaks" in unintelligible squeals, it seems only a matter of time before the humanity within her surfaces fully, including at least some degree of intelligent communication with (soon-to-be-dead) humans.

After Gwen Stacy brought Peter to Oscorp, she and Peter were asked to help a few doctors move a container which had Scorpia inside to a sector in the tower. Sensing Peter's cross-species blood, Scorpia broke out of the container, causing all the other cross-species to break out as well, and Gwen is bitten by Vermin (another one of Oscorp's creations) causing her to be infected. Later, all cross-species are now loose in Manhattan. After arriving at Oscorp Tower, Peter, now Spider-Man, takes an antidote made by Dr. Connors, Doctor Allistaire Smythe tests the antidote on himself, but ends up losing the use of his legs. After escaping Smythe's robots, Spider-Man is confronted by Scorpia and the two begin to battle, which ends with Spider-Man defeating Scorpia.

She later escapes and gets killed by Kraven the Hunter and was displayed as a trophy in Kraven's Loft in The Amazing Spider-Man 2 (Video Game). 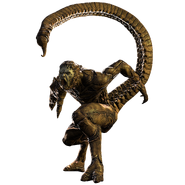 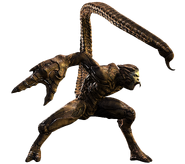