The Rhino
Mr. Criminal (by Spider-Man) Russian Guy in a rhinoceros machine

“I fought a russian guy in a... like a rhinoceros machine.”
― Spider-Man to Spider-Man[src]

Aleksei Sytsevich is a Russian mobster. After he was broken out of prison, Aleksei was given a mechanical suit by Oscorp Industries and dubbed himself The Rhino.

Aleksei Sytsevich and two of his associates hijacked an Oscorp van containing vials of plutonium. Sytsevich was the driver of the truck while his comrades secured the goods. However, Spider-Man intervened and webbed up Sytsevich's allies, handing them over to the police. Determined to not be caught, Sytsevich continued to flee in the truck, causing a great deal of damage to other vehicles on the road and a number of police cars. Spider-Man confronted Sytsevich face-to-face, using his spider sense to dodge the rapid fire of Sytsevich's machine gun. Spider-Man disarmed him and then webbed each wrist to the walls opposite so his arms were crossed over his chest. Spider-Man proceeded to pull down Sytsevich's pants to humiliate him further. Sytsevich was incarcerated in the Vault by the NYPD.

Later, after Harry Osborn's incarceration, The Gentleman visited Harry, speaking to him Harry about their plans for revenge against Spider-Man by forming a team of villains. He also informed Harry that Sytsevich was a prime candidate to pilot a large metal exo-suit created by Oscorp. Sytsevich was broken out of the Vault and donned the exo-suit. He took to the streets of New York, which hadn't seen Spider-Man since his confrontation with the Green Goblin and Gwen's death, and began shooting at the police, calling himself "The Rhino". A boy dressed as Spider-Man, who Spider-Man had helped out earlier, stepped out in front of Rhino, trying to make a stand. Rhino mocked the child when the real Spider-Man arrived on the scene. Rhino began to charge at Spider-Man who leaped in the air using a manhole cover as a weapon.

It is revealed that Spider-Man survived his confrontation with Rhino and beat him. Several years following the incident, he referenced to his battle with Electro to two other versions of himself from alternative universes.

Unlike all of the other cross-species, which were created after Curt Connors terrorized the city as the Lizard, Rhino was the result of a pet project of Connors' direct superior, Rajit Ratha. As Connors and Peter Parker worked to develop the serum that would ultimately turn Connors into the Lizard, Ratha applied what he had learned through Connors' research to black-market dealings. Without the knowledge or consent of his superiors at Oscorp, Ratha forcefully enlisted the help of Michael Morbius, threatening to end the reclusive biochemist's career if he refused to help. Morbius reluctantly complied, applying the rhinoceros DNA with which Ratha supplied him to a cross-species serum similar in nature to Connors' own for the Lizard.

Ratha's next step was to test the serum, and his underworld clients were all too happy to provide his oblivious human test subject: a low-level thug named Aleksei Sytsevich. If it worked, the mafia would have a new weapon on its hands; if not... no great loss.

After an excruciatingly painful transformation, Sytsevich was now a hybrid of man and rhinoceros, ready to tear apart anything in his path - Ratha's clients would be pleased. Unfortunately for the corrupted businessman, however, his own life was taken by the Lizard before the transaction could be completed. Morbius would soon claim that he created Rhino entirely of his own volition, with help from Connors' notes. Also, knowing that animalizing a human crossed an ethical line even at Oscorp, Morbius furthered the lie to suggest that Rhino was in fact originally a rhinoceros that was infused with human DNA. Only Sytsevich knows otherwise.

After the breakout of all the cross-species at Oscorp, the Rhino was found in a parking lot, surrounded by cars and trucks: things he loved to smash. Spider-Man found his way to the lot and fought him which resulted in the wall-crawling superhero slamming him through the pavement. Days later, Spidey would hear of reports of incidents and disturbances in the sewers. No doubt it's another cross-species, Spider-Man thought, and he was right. The Rhino was back, and the two battled it out once more before Spider-Man threw him into an electrical pit, and Sytsevich hasn't been seen since.

While visiting the home of Kraven the Hunter Peter is shown a room of his latest trophies. These trophies turn out to be Scorpion, Iguana, and Natte; cross-species Peter had battled before. However, only two managed to escape and not get killed: The Rhino and Vermin. Where they could be after surviving Kraven's hunt is unknown.

Meanwhile, J. Jonah Jameson gives Peter the job of finding evidence of some form of battle armor the Russians have managed to acquire, it turns out this armor is Oscorp's Rhino battle suit, hinting that the Russians plan to have one of their members use the suit at some point in the future.

Spider-Man first encounters Sytsevich during Chapter 2, trying to make a getaway on a helicopter. He is stopped by Spider-Man but soon returns as the boss for Chapter 2, located in Central Park. Sytsevich now brandishes a laser sword but is still taken down quickly. Spider-Man tells Sytsevich, "Leaving so soon? I thought we could go to the movies later, buy some popcorn and call it a day." Sytsevich then swears he will have his revenge on Spider-Man.

Later, after Spider-Man beats Electro for the 2nd time (Chapter 7), Sytsevich resurfaces for the second time, as the boss for Chapter 8. Sytsevich tells Spider-Man he got out so quickly through a high-tech lawyer (possibly referencing Otto Octavius) and also got the Rhino armor through him. The first boss fight against Rhino has him standing up and shooting at Spider-Man. After Rhino is defeated the first time, he retreats so Spider-Man has to take out his goons. The second boss fight Rhino is now more invulnerable being that he's on all four robotic legs and will frequently charge at Spider-Man. Spider-Man beats him by making him shoot his missiles at himself. Sytsevich then angrily calls him a "WEBBED DURAK!" and Spider-Man is surprised at his rude language.

Aleksei Sytsevich does not possess any superhuman powers. Nonetheless, his high-tech battle armor provides him with superhuman strength, endurance, durability, and a variety of onboard weapons. 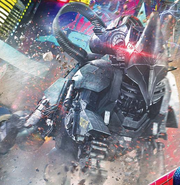 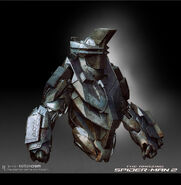 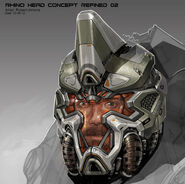 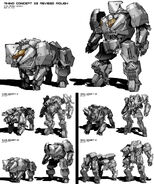 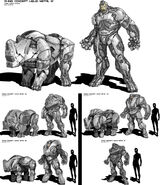 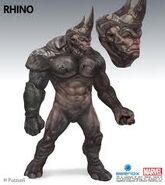 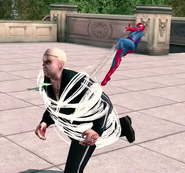 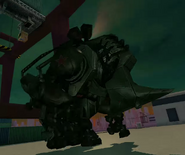